At Mercato, we are passionate about bringing authentic Italian experiences from Italy, to you here in Adelaide. In the next coming months, our main focus will be Sagre D'Inverno (Festivals in Winter) that are celebrated in the regions of Italy.

WHAT DOES SAGRA MEAN?

In Italy, a sagra is a local festival that is celebrated by the towns folks as well as people from all around the world. Most sagre revolve around a specific local food item that is at the peak of its season. That particular ingredient is then used in multiple triumphal dishes to revel in the community’s delicious bounty. These events are a great opportunity to see rural towns at their peak of excitement.  You can generally count on finding some carnival-type games, live music, and a good portion of the town’s population waltzing and dancing through the piazza.

If you'd prefer to travel when the large crowds of tourists have settled down, Italy's winter season is an ideal time for you to visit. With lesser tourists roaming the streets, you will find that perhaps there is more time to explore Italy in a more freely manner.  Winter is generally low season, other than Carnevale which falls in the period before Lent, generally during the month of February. Except in beach and island locations, many restaurants, shops and family-run hotels shut down. That means you can enjoy the major cities without the crowds, and hotels often offer significant discounts. Wintertime in Italy can be very popular for its snow and picturesque mountainous views. You will find an abundance of people in any of the mountain ski resorts as these areas draw many skiers, snowboarders and other snow sports enthusiasts.

Sagre a Dicembre | Festivals in December Riano is roughly 20km north of Rome, and is worth the trip if you love polenta and pangiallo! On the 8th of December, Riano host their Pangiallo and Polenta sagra. Polenta is well loved in Italy and is commonly known all around the world. Polenta is a dish of boiled cornmeal that was historically made from other grains. It may be served as a hot porridge, or it may be allowed to cool and solidify into a loaf that can be baked, fried, or grilled. Pangiallo on the other hand, will be a new discovery for most non-Italians. It literally means ‘yellow bread’- the yellow coming from saffron. The cake is studded with candied fruit, making it perfect for Christmas. At Riano’s festival you will be able to taste the Roman versions of both these Italian specialities. Roccasecca, in the province in Frosinone, Lazio, is a place where all the broccoli lovers come together every December. The town is well known for its love of broccoli ripassati, literally meaning to repass in reference to how it is cooked. Roccasecca broccoli’s bitterness pairs well with sausages and bruschetta and this is how it is usually served. However, each business in the old town prepares a different dish and distributes it from its shop or on the market stalls of the artisanal market. All of this is accompanied by folk music of the tradition of central-southern Italy.

The variety of dishes is extraordinary. 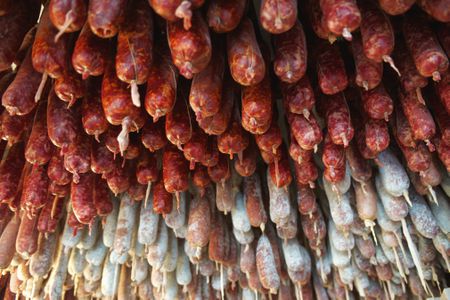 If you are fond of sausages, what better than 2 days in celebration of them!

Prossedi is a comune in the province of Latina in the Italian region Lazio, and this is where they produce delicious sausages seasoned with a unique mixture of orange peel, chilli, salt and coriander and then left overnight. The sagra arranges a feast with the sausages served with beans, pasta, broccoli and local wine. Of course in December, Christmas is a main celebration. On Christmas eve, most Italians enjoy dinner with their families which is followed by Midnight Mass at their local church. On Christmas day, the Italians typically join friends and family for a large lunch that goes on throughout the day, and sometimes into the next with the national holiday of Santo Stefano on December 26. Most places shutdown on December 25th but you can usually find a few bards and ethnic eateries open.

From antipasti to dessert, from breakfast to dinner, and from Christmas Eve to La Befana day, Italians love Christmas delicacies. Even though every family has its own traditions and recipes, there are some common traits around the country. On Christmas day, a classic Italian table would start off with various entrees. Some of these include of insalata di mare (seafood salad), salmone or tonno (fresh salmon or tuna fish), gamberetti in salsa rosa (shrimps with cocktail sauce), salumi, cheeses and cured meats. The main plate, depending on the region, would either be tortellini in broth, lasagne or another kind of pasta dish. To follow for seconds would usually be a salad, roast potatoes, fish/meat and other veggies. And of course, bread is always on the table. Normally after the main meal, a tasty variety of meat is served or fruit. Traditionally at the end of the lunch, the famous Christmas cake panettone would be served. This can either be enjoyed with coffee or liqueur. And if that isn't enough, torrone (classic Italian nougat), chocolate and homemade biscotti are also placed on the table.

January 1st is a national holiday in Italy, which means many places, including restaurants, shops, museums and historic sites will be closed, although you'll still be able to find a number of cafes and eateries that are open for lunch and dinner. Epiphany is also a national holiday and is held annually on January 6th, marking the 12th day of Christmas. This is the main event of the holiday season, the day on which Italians exchange gifts as the final day of the “Twelve Days of Christmas,” when a witch called La Befana fills children’s stockings with gifts. On this day, you will find that most places will be closed. The town of Urbania, in Le Marche region, holds a four-day festival for La Befana from January the 2nd to 6th. Children can meet her at the La Casa della Befana. This is one of the biggest celebrations for in Italy.

Love a great sale? Well shopping in Italy in January is a must as the winter sale period starts and lasts through mid-February. You’ll generally find the best discounts on clothing, typically 20 to 30%, though there are often even bigger bargains as the sale progresses and inventory starts to go down. If shopping is a priority in your travels, Florence, Milan, and Rome should be at the top of your list.

Sagre a Febbraio | Italy in February Carnevale is one of the biggest festivals in Italy at this time of the year.  During the period before Lent, which usually falls in February but can fall anywhere from late January through early April, the masked celebration takes place in many towns throughout Italy. The biggest and best is surely the Venice Carnival, with the entire floating city becoming a living theatre set for two weeks or more, a tradition that’s been taking place since the 12th century. Thousands upon thousands come donning costumes, attending masquerade balls and taking part in a variety of activities. The “grand finale” features a candlelit, silent water parade where hundreds of gondolas float along the Canal Grande.

If you're seeking the ideal chocolate fair, then this month sees the perfect destination. To celebrate this lovers' holiday Italians give each other flowers, plan romantic dinners and present each other with chocolates, much like throughout the rest of the world. The renowned Italian chocolate maker, Perugina celebrates this day by making a special edition of the Baci chocolate candies with a shiny red wrapper and a sweet red cherry and liquid centre rather than the traditional hazelnut one. These chocolates are always a favourite and inside the foil wrapper there is a "love note" with a romantic phrase.

Florence and Venice are traditionally considered to be two of the most romantic places in Italy but Verona, the city of Romeo and Juliet celebrates Valentine's Day with a four-day celebration of events designated "Verona in Love." In the centre of Piazza dei Signori a giant red heart is painted on the street and illuminated heart-shaped lanterns are featured throughout the city centre. Free concerts with romantic themes take place in Piazza dei Signori and there is a contest for the most beautiful letter written to Juliet.

Between 12th and 21st February, Fiera del Cioccolato will be showcasing some of the finest chocolates from all over Italy in the Renaissance city of Florence. Chocolate artisans will be displaying their offerings – among the exhibitors are Chocolate Cavalsani, Dona Malina and Croccanteria Bergamo.

In addition to the many stalls and displays, chocolate fans can enjoy a choice of other initiatives including meetings with experts, culinary experiences, and tastings. The young ones can attend special workshops and take part in games and classes which include the art of biscuit making.

Older visitors can look forward to classes that include becoming a Master Chocolatier for the day! A dedicated lab plays host to the class in which you can discover the art of creating delicious chocolates.